I Prayed For You Today

Speaking of prayer, James the brother of Jesus says,

The earnest prayer of a righteous person has great power and produces wonderful results. Elijah was as human as we are, and yet when he prayed earnestly that no rain would fall, none fell for three and a half years! Then, when he prayed again, the sky sent down rain and the earth began to yield its crops. (James 5:16-18, NLT)

Rain?  Rain represents life. Without water there is no life. In just a couple of sentences James equates the greatest of prophets, Elijah, who was God’s Word and presence to the people (before Jesus), with life (rain) and prayer.

Prayer isn’t just a blessing we pronounce before a meal to express our gratitude. It’s not just a thing we do to bookend a religious service or to close out a graduation ceremony. It is life or death. The mention of rain or no rain is a nice and tangible way to talk about the serious issues of life and death, and the wonderful result of rain (life) was produced by the prayers of Elijah.

Prayer was and is the difference; it is the catalyst, it is the means that God has given his people to call upon Him for help. Jesus came so that we might have access to the Father—so that we can pray and experience life.

The power of prayer—calling upon the Name of the Lord—is an ever-present and undeniable thread that runs throughout the Word of God. The great preacher and Christ-follower, Samuel Chadwick, says it this way,

“There is no power like that of prevailing prayer, of Abraham pleading for Sodom, Jacob wrestling in the stillness of the night, Moses standing in the breach, Hannah intoxicated with sorrow, David heartbroken with remorse and grief, Jesus in sweat of blood. Add to this list from the records of the church your personal observation and experience, and always there is the cost of passion unto blood. Such prayer prevails. It turns ordinary mortals into men and women of power. It brings power. It brings fire. It brings rain. It brings life. It brings God.”

I prayed for you today.

Attached is a five minute clip of a time of praise and worship to the Lord that Becca and I were privileged to lead at last week’s prayer gathering. Be blessed!

There isn’t much written in the Bible or in the history books about Holy Saturday—the day between Jesus’ crucifixion and resurrection. It is a backwards day, a hopeless day—an evil day. Its silence screams things like: hate, loss, war crimes, hyperinflation, malignant, shame, “there’s nothing more we can do,” good-bye and Jesus is dead.

And then the angel says to the women at the tomb and to you and me . . .

Let us be reminded that the suffering only lasts for the night. The darkness of Holy Saturday will end—evil spelled backwards is live—and joy comes in the morning.

Let the backwards silence of Holy Saturday be drowned out by the One who said,

“Here on earth you will have many trials and sorrows. But take heart, because I have overcome the world.” (John 16:33, NLT)

Be blessed on this Good Friday 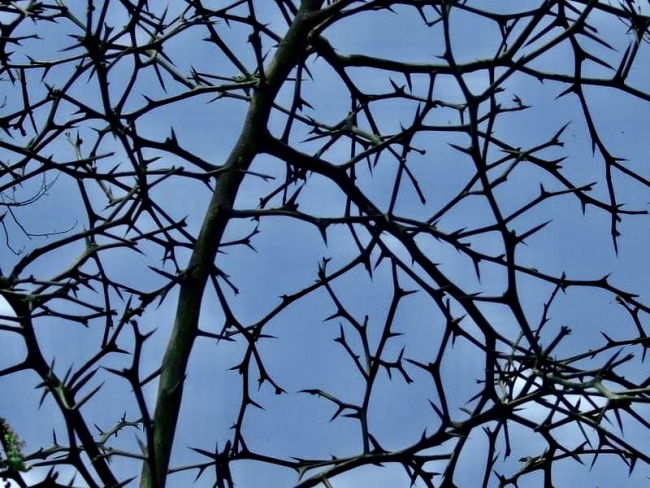 The last words that Jesus spoke upon the cross said so much. Here is a song/video that helps me remember.

Be blessed on this Good Friday. 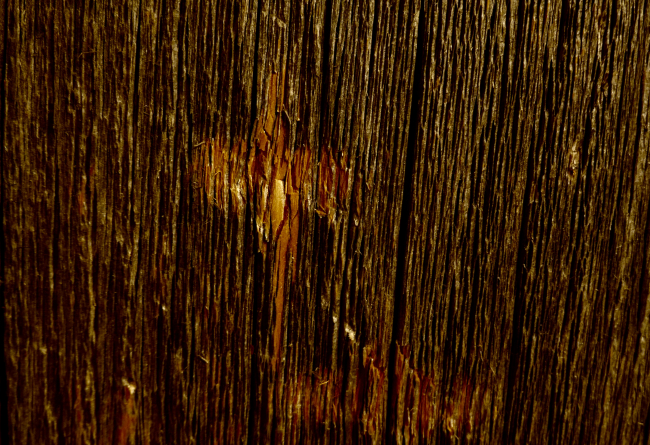 Where Jesus walked, the disciples followed;
But not all the way.
“Where I go now, you can’t. But later, ...”
Was all that He would say.

After midday prayers, Peter’s words rang out,
“No matter what or where or who;
You are mine, and I am yours.”
He said, “I will die with you!”

Amid friends huddled ‘round the fire that night;
“Hosannas!” gleamed in memory.
With hopes high, but resolve low,
The glow faded into Gethsemane.

They watched with the Christ in darkness,
But their prayers turned quickly to sleep.
And Peter’s vow, though earnest,
Was more than he could keep.

He drew his sword at the gleam of the torch,
But the Lord said, “No more of this!”
Jesus touched and healed His enemy;
And was led away, betrayed by a kiss.

Peter followed Him from a distance;
Keeping warm by the fire of his foe.
When asked, “You’re with Jesus, yes?”
Three times his response was, “No.”

With the lies came a rooster’s crow.
The look, a whip, the crown, a hill,
A cross, the cry, a spear thrust forth;
The King of Kings to kill.

He ran to the tomb, bent low and went in,
Echoes, predictions, rags filled the space.
“Tear down this temple and in three days it will rise.”
Peter left, wonder full on his face.

There were sightings and sayings that, “He is alive!”
Stories no book could contain.
Yet ashamed, Peter watched the Christ from afar;
He should laud, but his failures remained.

Peter said to his friends, “Let’s fish,” and they went,
To row and to cast was no chore.
The fish, they were few, but the company good;
Then they heard a voice from the shore.

Jesus was there, by the fire, cooking food.
He said, “Come my friends, let’s eat.”
Peter pledged all his love—heart, mind and soul,
Jesus smiled and said, “Feed my sheep.”

“Your own efforts and failures, left you lost and in chains,
Through my wounds and my death you are free.
Where I went, you could not go on your own,
But now . . . in my power, follow Me.” 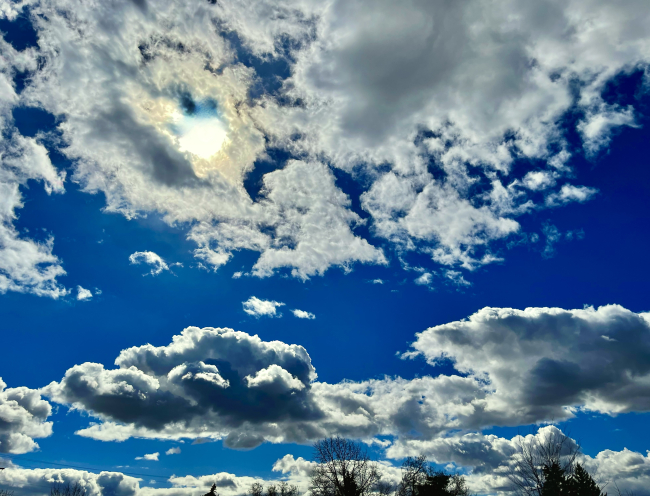 I will never forget the day that Becca broke her arm. We were having fun together at the elementary school playground near our house and Becca was showing me her first-grade “skills” on all the different play equipment. She was climbing and hanging and swinging and saying, “Watch this Daddy,” and “Look at me, Daddy,” and I was close by watching and “oohing” and “aahing.”

And then it happened.

Becca slipped off the bars and fell to the ground. She put her hand out to break her fall and landed on her arm. As I ran toward her she looked up at me and cried, “Daddy!” and I can still hear her voice—it sounded so shaky and fragile and fearful—it pierced my heart.

I helped her immediately. I gently cradled her hurt arm in my hands and calmly told her that everything was going to be OK. I held her close as we walked back to the house and I assured her that her Mom and I were going to take her to the doctor. Two hours later Becca’s tears and pain were replaced with a good story and a fancy blue cast—and I was the first person to sign it.

“Daddy!” . . . I will never forget the sound of Becca’s cry. Even before she called out to me, I was running to help her, because I love her.

How much more does God the Father love you and me? He so wants us to call out to Him—and a cry is all it takes. When it comes to prayer, God isn’t picky. He wants to hear from us and He wants to help us because He loves and delights in us just like parents delight in their children.

The LORD doesn’t require perfect words or polished language. Your voice gets his attention. Your cry pierces his heart. God is a good Father to his children. He hears us, helps us, saves us, “oohs” and “aahs” over us . . . and loves us.

Call out to Jesus.

For the joy set before him [Jesus] endured the cross, scorning its shame, and sat down at the right hand of the throne of God. (Hebrews 12:2, NIV)

The joy set before Jesus was you and me! He went through the horrific pain, struggle and humiliation of the cross so we could find mercy, grace and life with God.

When I was 27 years old I left my job as a fifth grade teacher and took a position as an elementary school principal. That might sound good and glorious, but it was difficult . . . I mean—diarrhea every day—difficult.

I was the youngest adult in the building, I was the boss, and I was a nervous wreck. One day I was so stressed that when the secretary brought a purchase order into my office for me to sign, all I could do was scribble—and it looked nothing like my signature. The secretary saw my shaky hand and with concern said, “Oh Ryan . . .”

At the time, being a principal wasn’t my dream job, but it paid the bills (nearly double what I made as a teacher) and made it possible for my wife to stay home and care for our newborn daughter. I didn’t like the stress and the struggle, but that didn’t matter. I was thankful for the job and did it for the joy set before me—my wife and my daughter.

But all that doesn’t come close to what Jesus did for you and for me.

He left Heaven, came to earth as a baby, lived as a servant, healed the sick, loved the unlovely and showed us God’s heart. And in return, He was wrongly accused, slapped, spit upon, mocked, beaten and tortured. He was stripped naked, impaled on a wooden cross and died a criminal’s death.

He could have called ten-thousand angels and stopped the pain and injustice, but He didn’t. He did the hard thing. He paid the price for you, me and the whole world so that we might be free from the power of sin and death in our lives. We were a mess, but while we were yet sinners Christ died for us.

He did it for the joy set before Him and that joy was you and me!