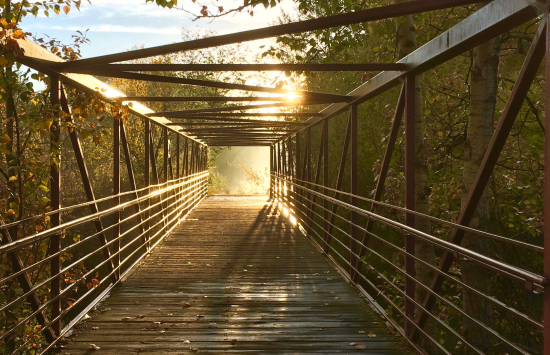 Where Jesus walked, the disciples followed;

But not all the way.

Was all that He would say.

“No matter what or where or who;

You are mine, and I am yours,

I will die with you!”

Amid friends, huddled ‘round the fire that night;

“Hosanna in the highest!” a bright memory.

With hope high and resolve low,

The glow faded into Gethsemane.

And Peter’s vow, though earnest,

Was more than he could keep.

He followed Jesus at a distance;

Keeping warm by the fire of his foe.

When asked, “You’re with Jesus, yes?”

Three times his response was, “No.”

A cross, the cry, a spear thrust forth;

The King of Kings to kill.

With guilt and regret—his choice.

Now what? Now where? Now who?

He ran to the tomb, bent low, went inside,

“Tear down this temple and in three days it will rise.”

There were sightings and sayings that, “He is alive!”

Stories no book could contain.

Yet ashamed, Peter watched the Christ from afar;

He should laud, but his failures remained.

Peter said to his friends, “Let’s fish,” and they went,

To row and to cast was no chore.

The fish, they were few, but the company good;

Then they heard a voice from the shore.

Jesus was there, by the fire, cooking fish.

Peter pledged all his love—heart, mind and soul,

“Your own efforts and failures, left you lost and in chains,

But through my wounds and my death you are free.

Where I went, you could not go on your own,