it really is that simple 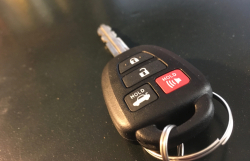 This morning I rushed out the door to meet a friend for coffee, but was stopped because I couldn’t get into my car. I put the key in the handle to unlock the door and I tried to turn it, but it wouldn’t budge. The lock was frozen. I had no way to get into my car. Needless to say, I was late for my coffee appointment.

I have a key fob that opens all four car doors at once with a push of a button, but it had stopped working a couple of years ago, so I went “old school” and resorted to using the key. I didn’t look into the fact that the fob was not working because I thought it was too complex to fix and surely too expensive. I assumed I needed an entirely new key fob, and who knows what else. So, I just got by and used the key to unlock the car.

However, the frozen lock and my nearly missed appointment motivated me to take action. I was ready to pay the price, put in the time and deal with the hassle. Later in the day I called the dealership, told them my story and asked if they had any new key fobs available. The person on the phone said yes, but then he asked, “Did you check the battery?”

Huh? Is it really that simple?

This experience reminded me of a conversation I had the other day with a friend that I hadn’t seen in a long time. We unexpectedly ran into each other at a social function and had about five minutes to chat. We briefly talked of work, life, sports . . . and eventually the topic of faith in God came up. My friend said that his faith and relationship with God had become a bit cold and distant of late. He seemed forlorn and disheartened.

I’ve been there. That is a tough, discouraging and lonely place to be. You feel like a failure, and the way back to God seems too complex and too costly.

I wanted to help my friend and my mind immediately went to James 4:8,

I shared the verse with him and he paused a moment and asked, “Is it really that simple?”

Our five minutes were up. I could have shared with him about the loving Father that is standing on the road waiting and watching for the prodigal’s return (Luke 15). I longed to tell him that Jesus doesn’t give up on us; He is ever knocking at our heart’s door (Rev. 3:20). I yearned to remind him that God is faithful, even when we aren’t (2 Tim. 2:13). And I wanted to talk with my friend about God’s mercy and grace, which is ours for free because of the extravagant price paid for us by Jesus on the cross.

In response to my friend’s question I said,

It really is that simple.