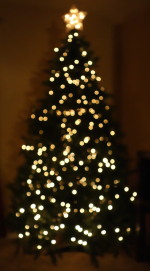 I recently finished reading the book, Joy in the Journey, by Steve and Sharol Hayner and in it I found a piece of writing by Steve Hayner that provides a clear picture of why it is so appropriate to celebrate Christmas.

In the jumble of the Christmas Season we find Santa Claus, trees, lights, gifts, decorations, Rudolph, family gatherings, carols, Hallmark Christmas shows, a star, wise men, shepherds, an angel, a manger and a baby.  And like last year’s Christmas lights, all of that and more tangle together to make up what many of us currently consider to be Christmas.  I like all that stuff. (OK, since Santa is watching . . . I don’t like the Hallmark Christmas shows—how many ways can you tell the same story?)

There is a story behind Christmas, and the story is important. Much of the Christmas season, with all of its songs, pageants, and celebration, is built around the following passage of scripture:

“Do not be afraid. I bring you good news that will cause great joy for all the people. Today in the town of David a Savior has been born to you; he is the Messiah, the Lord.” Luke 2:10-11 (NIV)

These are the words of an angel, announcing the first Christmas.  The defining term used is, “good news.” We live in a world overrun with news, but what makes news good?  Good news is all about context. News that solves a problem, addresses a challenge, meets a need, resolves a dilemma, or gives hope, is good.

In the writing below, Steve Hayner provides the back-story, or context, for the good news of Christmas. Give it a read and find out why Christmas is the good news, worthy of celebration.

A Confession of Faith

by Stephen A. Hayner

When God created the heaven and the earth

When God created all that lives

He crowned creation with humankind

And said, “This is very good.”

The people who walked in Light,

Walked in perfect fellowship with God;

In perfect harmony with each other and with the earth.

They were whole, alive, full of joy, without fear;

They know who they were because they knew whose they were.

But they grew proud in their sufficiency,

In their abundance they forgot God.

They turned within themselves for answers

And the Light flickered out.

Once they were God’s people—now they were no people.

Over the years many proposed that the darkness was normal.

Others tried to dispel the darkness with small glimmerings.

Still others, too proud to admit that something was wrong,

Just pretended that they didn’t notice.

But in the darkness lurked the fears, the sins, the insecurities,

the hurts, the sufferings, the guilt, the loneliness,

and ultimately the death which no one could finally avoid.

His good and perfect creation

Spin worthlessly off toward eternal darkness—

Infinite separation from himself.

So he began to work out his plan.

He sought out people in the darkness who in faith

Would live by the Light which they could not see.

Then, when the time had fully come, God sent his Son.

What the people living in the darkness could never do

God did by sending the One-who-was-Light into the dark.

This Light, this Life, this Lord shone in the darkness

But the darkness could not comprehend.

He came to the world which by virtue of creation belonged to him,

But the world did not recognize him or embrace him.

Yet to all who received him, he gave the right to become children of God—

Not because they were good,

Not because they tried hard to please,

Not because they were worthy in any way,

But because in his love, God never gives up.

Few welcomed him at his coming;

He slipped into the world so quietly.

He might have come completely unnoticed had God not been overcome

By his own joy.

To some shepherds who were not accustomed to receiving mail,

On the wings and songs of a million angels.

He sent another written in the stars to some Gentile astrologers.

While he lived among us, not many believed in him.

There were a few fishermen, who were not really looking for a new job;

A couple of tax collectors, who probably should have been

looking for a new job;

And a few handicapped folks who had been wishing for years

that they could get a job.

He called each of them by name.

He brought Light into their darkness;

Wholeness into their lives;

Eternity into their souls.

Jesus Christ who was Light, so threatened the darkness that

humankind did what they had been doing to God for years—

They tried to box him up,

They tried to explain him away,

And finally they killed him.

But God raised him from the dead.

The Light would never again go out.

The Holy Spirit was sent to burn within those who believed in him.

As quietly as he slipped into the world,

He now slips into believing hearts—

As surely as he changed the world by his coming,

No person remains the same after meeting the living Christ.

This is the Good News.