In the Dark - Book Review 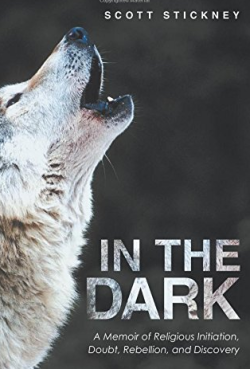 In the Dark: A Memoir of Religious Initiation, Doubt, Rebellion, and Discovery

In the early 1990’s Scott Stickney and I served on staff together at a church. My memories of Scott include kind interactions, outside the box thinking, and long lunches that were always accompanied by deep questions, thoughtful pondering and uproarious laughter. (All of which I experienced as I read his book.)

At that time I was a rookie minister and Scott was a veteran associate pastor who took the time, and made the effort, to encourage and assist me in my ministry and in my life with the Lord.  He inspired me to think deeply and to live thoughtfully. He helped me along in my journey of spiritual formation.

It has been over twenty years since I have crossed paths with Scott.  Through the grapevine I heard that he was working on a book, and I knew that a book by Scott Stickney was a book that I wanted to read.

A few weeks ago, when Scott’s wife announced (on social media) the completion and availability of his book, I immediately ordered it from Amazon and began reading it upon its arrival at my front door. I thoroughly enjoyed, In the Dark: A Memoir of Religious Initiation, Doubt, Rebellion, and Discovery.

Memoirs are powerful. A true story, or “testimony,” is weighty, but a testimony offered up with thoughtful reflection is compelling, and Scott’s memoir, In the Dark, is all that and more.

The author, Kim Stafford says, “[T]he work of memoir is to put personal memory in a form that may serve the memories of others.” As I read Scott’s book, there were times that I squirmed uneasily when he mentioned and reflected on challenging and unsettling experiences that he had with people that I knew and admired. I winced more than once when my own memories, personally and painfully, resonated with Scott’s reflections upon his childhood days in Santa Rosa. Good memoirs are oftentimes uncomfortable that way. Scott’s very personal reflections serve an important purpose in his story, but they are just a part of the rich message of faith and discovery that is detailed in his book.

It has been said that, “who you are and what you will be depends on the people you meet and the books you read.”  I see evidence of this throughout Scott’s memoir as he tastefully and effectively weaves into and throughout his story many thoughts and quotes from his four literary mentors:  Carl Jung, Søren Kierkegaard, Dietrich Bonhoeffer and Charles M. Schulz (yes, the cartoonist).  What a joy it was to encounter and experience these people in and through Scott’s writing.

Another person you will meet in Scott’s book is Mrs. Fear (and trembling). She stands as a model of love, mercy, grace and abandon to Almighty God. Oh, that we all would have a Mrs. Fear in our lives—at least for a season.  She alone is worth the price of the book.

Speaking of value, at the end of each chapter in Scott’s book the reader is prompted to “Question Boldly,” via comments and questions that are provided. These sections are of great benefit to the reader as they grope through the sometimes dark process of spiritual maturation.

Scott Stickney’s book, In the Dark: A Memoir of Religious Initiation, Doubt, Rebellion, and Discovery, reads well and is a spiritual memoir that I heartily recommend.  Scott Stickney’s thoughtful writing will stir the dark embers of your heart and life into a faith that finds its light and source in Jesus Christ.