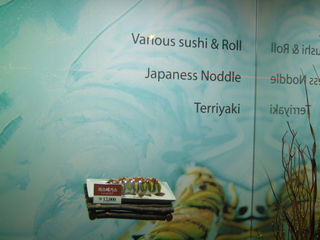 Every once in awhile we come across one of these "fun" signs in South Korea.  You can get Japanese Noodles at lots of restaurants, but I bet you can't find some of these menu items just anywhere.

Back to Work With Joy 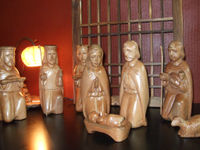 There are many great things about being in education and teaching kids, but one of the best things about being a schoolteacher is Christmas break.  A good two weeks off from school, with the festive day of Christmas nestled in the center of the vacation, makes for a truly, “wonderful time of the year.”

One of the saddest times of the school year, for students and teachers, is when Christmas break is over.  The new toys are shelved, the decorations come down, and the reality of normal life is realized, even as the final strains of “Auld Lang Syne,” hang in the air.

I wish Christmas (and Christmas break) would never end.  I wish that I could just stay in the place of wonder that accompanies the season and the message of Christmas.  Is that how the shepherds felt at the time of Jesus’ birth?  From the little that is known about them, it appears they had it rough.  They were living in a time of harsh governmental rule and their jobs as shepherds were at the bottom of both the social and economic ladders.  They were stuck in dead-end jobs, living seemingly hopeless lives and they ended up being some of the first ones to see the Savior.

In Luke 2, the angels announced the birth of the Savior to an unlikely band of sheepherders and in response the shepherds dropped all they were doing and hurried to town to see the baby.  The shepherds left their flocks—the sheep that were to be used as temple sacrifices—and went to a manger to behold the “Lamb of God who takes away the sin of the world.”  It is hard to imagine the joy and hope that the shepherds must have felt as they knelt before the one proclaimed by the angels as the Savior and Messiah.  I am sure that they never wanted to leave that place and they never wanted that moment to end.

“The shepherds went back to their flocks, glorifying and praising God for all they had heard and seen. It was just as the angel had told them.”  Luke 2:20 (NLT)

The shepherds didn’t stay in the company of Mary, Joseph and the infant King.  They left.  They “went back to their flocks.” They went back to the same bleating sheep and to the same challenges, hungers, frustrations, fears, struggles and circumstances that are common to all humankind.  The Christmas decorations came down and they returned to the real world of work and life.  They returned, “glorifying and praising God for all they had heard and seen.”

Nothing in the lives of the shepherds had changed…but they were changed.

It wasn’t until thirty years later that Jesus started his ministry and began to show faint signs of Messiahship.  Even then, he didn’t measure up to what anyone had in mind for a Messiah.  Ultimately, the one that the angels proclaimed as Savior and King was crucified on a cruel Roman cross.

The shepherds went back to work, “glorifying and praising God for all that they had heard and seen.”

What have you seen and heard?

On this side of the Christmas story we all have a wonderful perspective of the One that the angels proclaimed to the shepherds on that night so long ago.  We know of Jesus’ life.  His miracles.  His love.  We know of the cross…and the empty tomb.

Christmas 2008 is over and we all have gone back to:

The festive decorations have come down, but the celebration of Christmas doesn’t have to end.  Move into the New Year with hope and joy.  Though we still “see through a glass darkly”—we all have a clearer vision of Jesus than the shepherds did some 2,000 years ago and they returned to work…

The true followers of the Way must avoid becoming set in their ways.

"The wind blows wherever it pleases. You hear its sound, but you cannot tell where it comes from or where it is going.  So it is with everyone born of the Spirit."  John 3:8

"A good man is not a perfect man.  A good man is an honest man, faithful, and unhesitatingly responsive to the voice of God in his life."     --John Fischer

I really like John Fischer.  If you haven't read any of his books, you should.  The above quote serves as encouragement and inspiration to me. 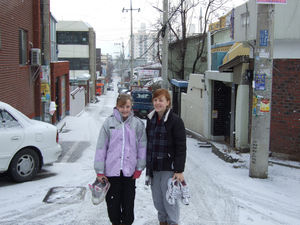 It finally snowed here in South Korea.  The other day we woke up to a light blanket of snow on the ground.  Snow in the city is interesting.  It turns an otherwise grimy city into a crisp, clean looking place.  It makes an otherwise noisy city into a quiet place.  It slows everything down.  The taxis move at a safe pace for a change.  The other cars tentatively inch along the roadways and the delivery people on motorcycles slow to a crawl.

Kids love snow--even here in the city.  I heard some shouts and laughter and came around a street corner to find two boys "sledding" down the hill near our house.  They were using pieces of cardboard as sleds and they were sliding down the middle of the street. 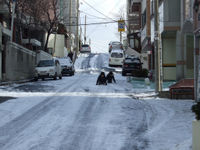 There is something special about snow.  No matter where you find it--in the mountains of Idaho or the streets of Daejeon, South Korea--snow equals fun.

I needed to hear this, so I said it (or posted it).  Go ahead and listen in.  Maybe you need to hear it too.