"Imagination is the greatest gift God has given us and it ought to be devoted entirely to Him." --Oswald Chambers

Last Saturday I attended an International Festival (I-Fest) that was hosted and sponsored by the International Christian School that I work at here in South Korea. The weather for the event was perfect and the campus was filled with people that were enjoying themselves as they visited the various booths, games and activities that were featured at “I-Fest.” 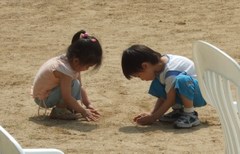 There were lots of child focused events at the festival like face painting, a dunking booth, balloon animals, carnival games and even a rickshaw ride. In the midst of all of the festival activities I noticed two cute little kids playing in the dirt. I don’t know if they were building castles or making cakes, but it was evident to me that they had bypassed the alluring world of cotton candy and carnival rides and had entered the indescribable realm of imagination.

As I looked at the children and considered their obvious joy and contentment at playing “make-believe” in the dirt, I couldn’t help but think that they had something that I desperately needed in my own life—imagination.

Imagination is something that adults are all too quick to write off as a childish attribute. The world is too serious. It is a place where rational thinking is deemed reality, all things are explainable, and “pretending” is replaced by materialistic “things” and amusement. As the bells and whistles of “stuff” go off all around, the call of creativity is stifled and imagination is relegated to the realm of entertainment.  This is not how it should be for a follower of Christ.

Jesus speaks of the necessity of having a childlike faith as it relates to following him.  "Imagination" is a childlike trait that must be realized in the faith of a Christian believer. In Hebrews 11:1 it says, "Faith is being sure of what we hope for and confident of what we do not see."  In other words, it says that Christians are to engage the world of reality around them with a strong dose of hope-filled imagination.

Throughout the New Testament, the Apostle Paul makes reference to the "mystery" of Christ and to the "mystery" of the Gospel.  Words like "imagination" and "mystery" are not terms that are only reserved for fairy tales and fantasy.  They are integral to the life of a follower of Jesus Christ.  Eugene Peterson says, “For Christians, whose largest investment is in the invisible, the imagination is indispensable, for it is only by means of the imagination that we can see reality whole, in context.”

God is the giver of all good things and the element of "imagination" is a unique and treasured gift that He has given to humankind.  Within the realm of "imagination" the unseen becomes visible, peace is realized in the clamor of the world around, and there is a conception of hope in the unknowing glance at the future.

Just like the little children at I-fest, Jesus played in the dirt too.  Instead of making mud pies, he made mud and healed the blind.  Imagine that...

Posted at 07:22 AM in Devotional reflection | Permalink | Comments (1)

Thanks for the good words of hope in a God "who is able to do immeasurably more than we can ask or imagine..." With the indwelling of the Holy Spirit we can be tuned in to the wonders of God; if we can screen out the noise of a culture set on devouring our spiritual lives.
The "hope-filled imagination" can only come when my hope is in His power to overcome the selfish nature of my heart.