On Wednesday afternoon Jason and I had a break in the conference in the afternoon and instead of going to our rooms and taking naps we jumped in a taxi and went to one of the “innermost” parts of the city of Guangzhou.  This was an area of town that was indicative of the way that most of the people in the large Chinese city live in daily life.  This was not a tourist area—there were no souvenir shops nor were there any tourists or foreigners to be seen in the area—except for us.  In a later post I will share some more pictures and comments about what we saw and experienced in our visit to this very fascinating place.

The taxi ride to this area of town took about forty minutes.  Along the way there were lots of sights to see.  Above is a picture I took from the taxi that gives you a tiny idea of the huge volume of people that live, move and have their being in the city of Guangzhou.  The picture is not one of a group of people that are just getting out of a stadium after attending a crowded concert or sporting event—they are just people that are walking and riding their bicycles to and from work and/or home.

In our visit to the “inner-city” of Guangzhou we did walk through some local market areas where they were selling lots of interesting things that were associated with oriental medicine.  There were bags and bags of dried leaves, stems and roots, and there were all kids of strange and pungent smells associated with the products.  We passed by more that one outdoor shop where a person was sitting smoking something out of a very large, three foot long bamboo pipe.  The people smoking the large pipes looked very old but at the same time rather healthy.  I am sure it is good for you.

Posted in this blog post are some pictures of some of the items that we came across that were for sale at the oriental medicine markets.  For a very reasonable price we could have purchased some dried lizard skins, a huge bag of dried seahorses, and a bundle of dried snake skins.  These were just a few of the very unique things that we found for sale in the market area. 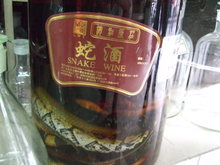 One shop that we came to was filled with all kinds of large jars and even some huge vats.  Upon closer inspection we found that the huge vats were filled with dead pickled snakes.  The vats were covered with transparent glass tops and it was surprising to see that the snakes were HUGE.  Many of them looked to be five to eight feet in length and about three to four inches around in diameter.  They were all dead but it was a bit creepy.  The girl in the shop took us over to a display case and tried to sell us a bottle of wine—snake wine. It was tempting... but we said no and quickly moved on down the street.