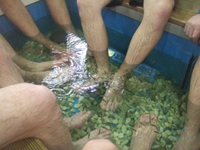 This past weekend I attended a men’s retreat that was held in a large hotel/convention center in Mokcheon, South Korea.  Located near the hotel was a large aquatic center that featured, water slides, swimming pools, wave pools, hot tubs and……............ Doctor Fish.

In the center of the complex there was an area that featured two tubs of doctor fish.  For a small fee people could sit on the edge of the tubs and let the doctor fish nibble at their feet.  Sounds freaky doesn’t it?  It was. 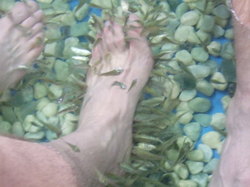 A bunch of the guys from the retreat converged on the aquatic center and took the plunge into the Doctor Fish pool.  It was a weird experience.  It just didn’t feel right to “let” a fish nibble on my toes.  I wanted to jerk away, but didn’t.  At times there were scores of fish nibbling away at my feet at one time.  It didn’t hurt, it felt like the prickles that you feel when your foot is waking up after having fallen asleep.

The Doctor Fish did their job.  All of the dead skin and calluses were gone after the fish got through.  It was an interesting experience.

Have you been pumping some Fe?

No I have not been pumping any Fe (iron) What you see there is Fa....t.

I loved this entry, it just cracked me up...so I was happy to see it again over here on your Ramblings! :)