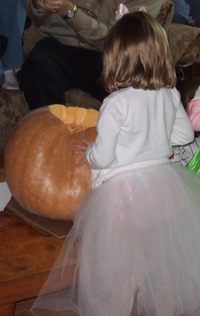 The room was full of children of all ages.  They were all decked out in costumes, buzzing from the excitement of a night filled with trick-or-treating (and sugar) and now they were all gathered for a big party to culminate the evening.

Just as the festivities were getting started, in walked a little kindergarten aged girl (a princess) with her parents.  As she entered the room filled with children, costumes and excitement, her eyes fixed upon a large pumpkin that was sitting on the coffee table in the living room.  "Look at that pumpkin!" she exclaimed.  She bypassed all of her friends, the treats, the noise and the fun, and she ran to admire the pumpkin.  She lingered there for awhile.  I was taken back by the simplicity and the beauty of the scene.

I don't know why she was so drawn to the pumpkin.  Maybe it was because she had grown up in South Korea where they don't display many pumpkins during the fall season.  Maybe it was because as she looked down into the giant pumpkin she could see Cinderella being whisked away to the royal ball.  Whatever the reason, her childlike response to the pumpkin got my attention.

I find that I get so distracted from those things that matter most.  Material possessions, the crowd and a penchant for greatness, cloud my vision from seeing and focusing upon those things that are most meaningful in life.  Oh to view life and this world through the eye's of a child.